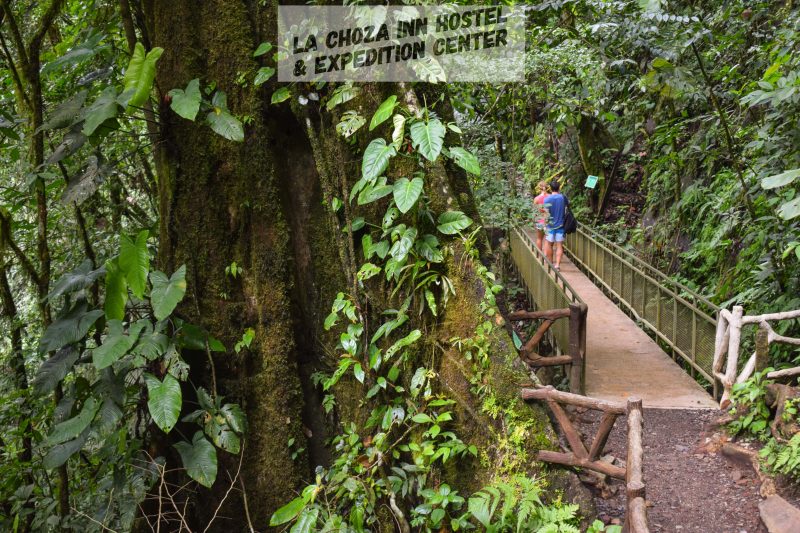 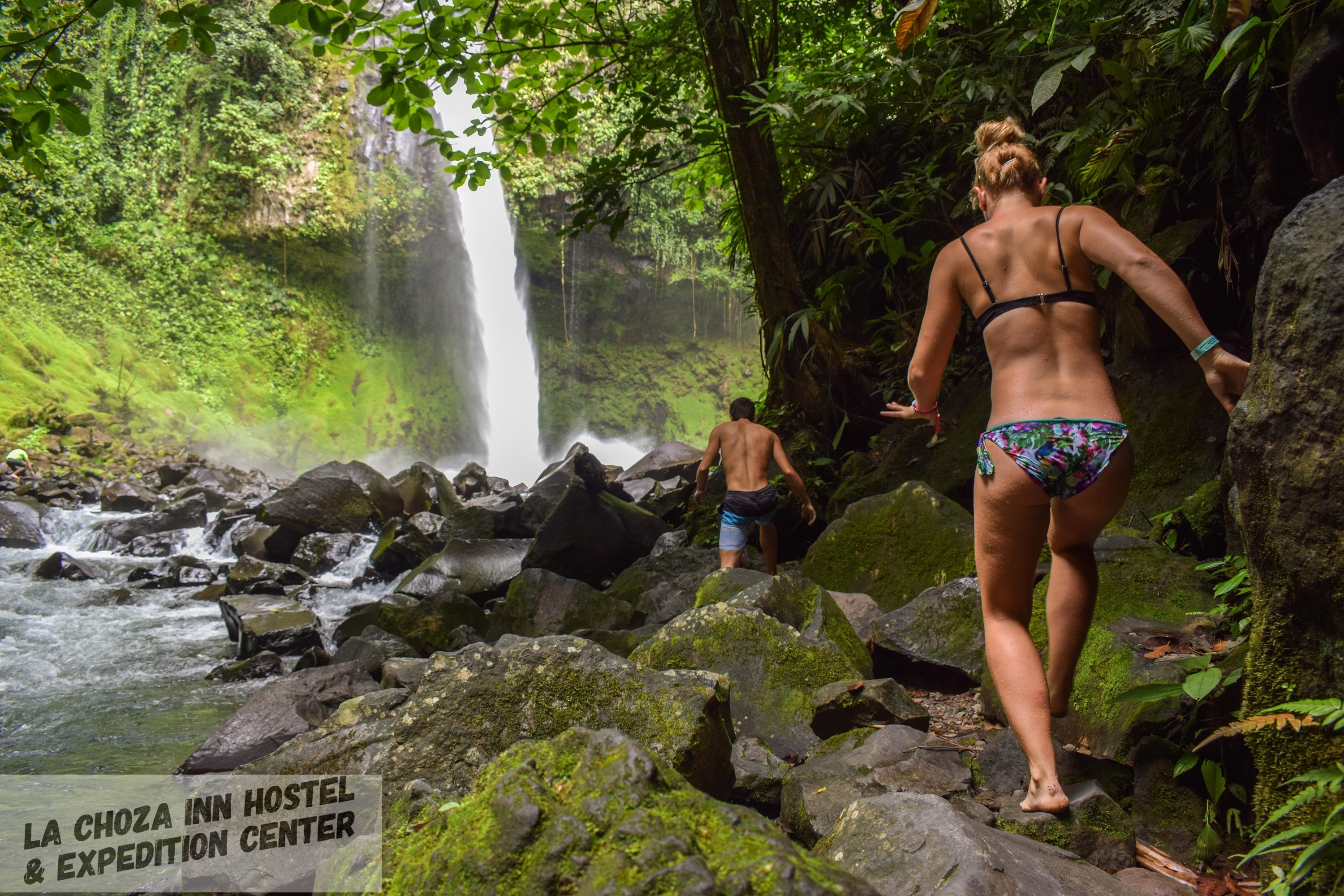 La Fortuna Waterfall The waterfall drops about 70−75 meters and is located at the base of the dormant Chato volcano, about 5.5 km outside of the town of La Fortuna, near the Arenal Volcano. It is fed by the Arenal River,[1] which travels through the rain forest in the Arenal Mountain range until it plunges over the cliff, forming this waterfall. The admission is $18 USD for adults and $15 for children over 6. The hike down to the waterfall is a short but arduous one, along a staircase carved into the hillside. Guests are encouraged to swim in the stream and small rapids below the falls, and there’s a lifeguard on duty. There are restrooms and showers in the guest facilities atop the cliff, along with a restaurant and gift shop. It should take 10 minutes to go down and about 20 to get back up to the parking lot. Open from 7:30 am to 4:00 pm. 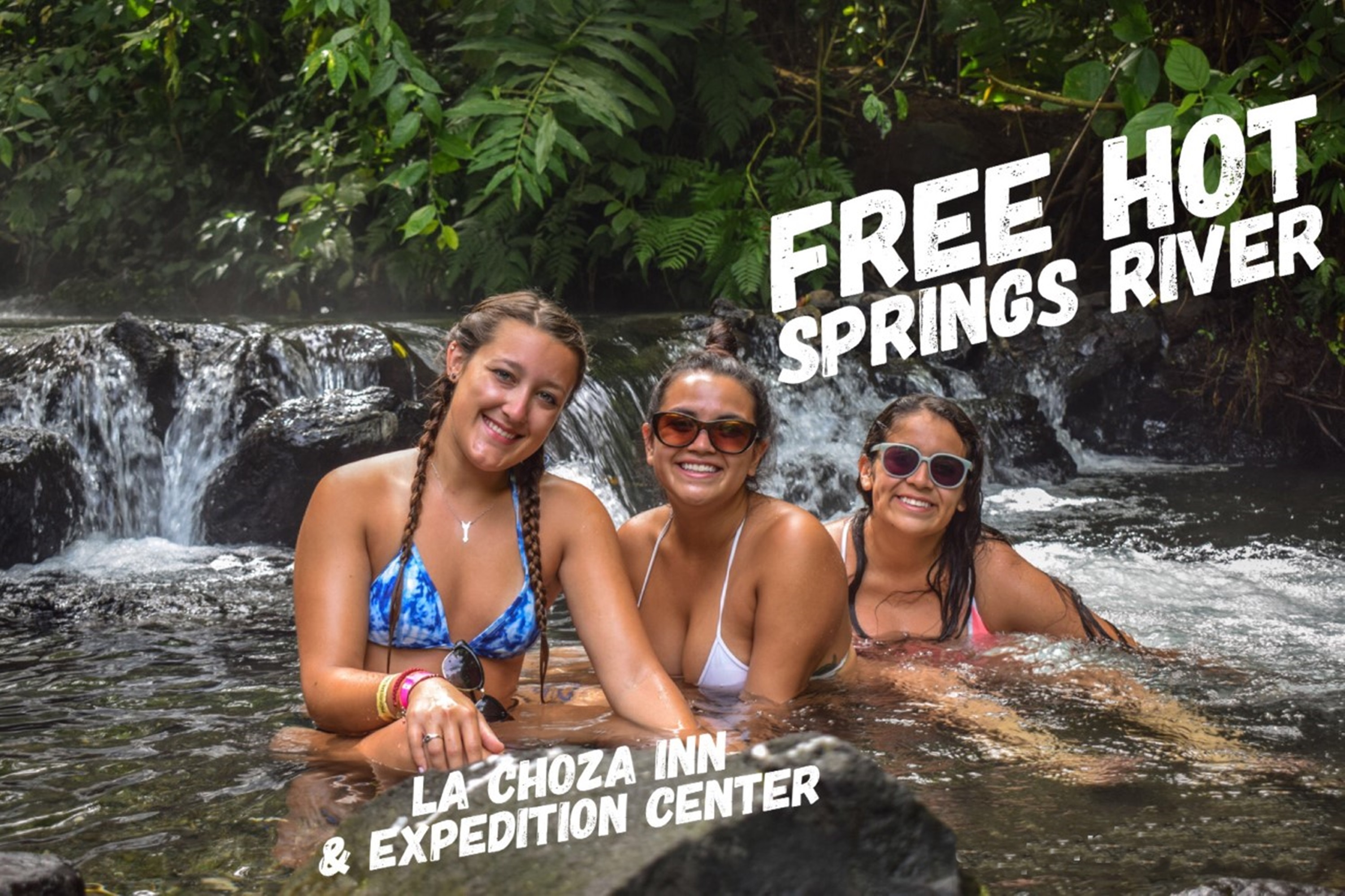 The thermal heated Tabacon river, which heats the springs at the famous Tabacon Resort, continues to flow past the hotel property, making this pleasantly steamy river accessible and free. Bathers will be treated to warm waters and stunning rainforest surroundings. This is a great option for those on a budget or who don’t want to be bothered with large crowds and pricey entrance fees.

The town of Arenal was relocated to higher ground when the lake was expanded in 1979. The old towns of Arenal and Tronadora now lie abandoned at the bottom of the lake, with the new town of Arenal existing to the northeast on the lake.

This is a natural and free trail located in La Fortuna, next to Lake Arenal, some tour operators use it for bird watching.

Once you get to Arenal Lake right on the right you see a gravel road, this route also leads to the Arenal National Park as shown in the red line of the image.

It is one of the most beautiful scenic tours of the Arenal Volcano where you can see the Arenal Lake, the Volcano and a great variety of birds, monkeys, tropical plants with beautiful colorful flowers and more. At early hours in the morning is the Best time for this tour or around 4 pm

This Natural trail has a distance of 4  km and it can take 45 minutes to get from one point to the other as indicated by the red image.

El Salto (The Rock Pools) is a free local water hole surrounded by a tropical forest. It’s a great place to cool down on a hot day. The water hole is a small clearing in a river, downstream from La Fortuna Waterfall. There are large rocks encompassing the river and a small waterfall leading down to the water hole. Spend your morning or afternoon jumping off rocks, swimming in the water hole or hanging around the river bed. If you’re feeling adventurous, try the rope swing! 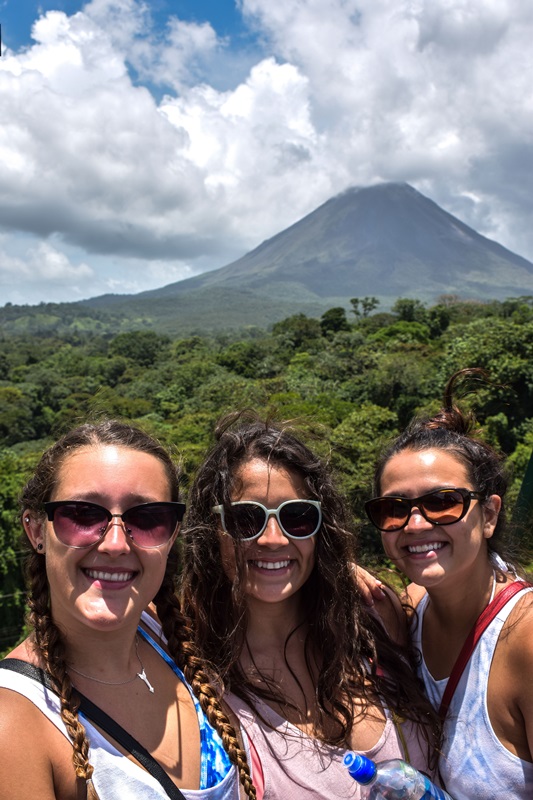 The park encompasses the Arenal Volcano, which “was” the most active in the country, which had previously been believed to be dormant until a major eruption in 1968. It neighbors Lake Arenal, which is the site of the country’s largest hydroelectricity project, the Lake Arenal Dam.

The park also contains a second volcano, Chato, whose crater contains a lagoon. It is also called Cerro Chato (literally Mount Chato) as it has been inactive for around 3500 years–coinciding with the creation and growth of Arenal itself. In and around the park are various lodges and hotels, some with their own hot springs, and others focused on the wildlife of the area. Within the national park are the Museum of Volcanicity and a ranger station.

Go to the Home page

Abrir chat
1
How can i help?
Hello!
How can we help you?